Wow. It's been a long time since an update, and I have a lot to tell. There will be a lot of pictures.

The biggest changes have been in the 29 gal community. It is almost completely stocked. In the beginning of January I ordered my Farlowella acus from Invertibrates by Msjinkzd. Since I knew it might still be a while before there was some color and movement in the tank I also ordered a handful of red cherry shrimp (Neocaridina heteropoda var. red) to add some movement and color. Everyone arrived safe and in great health; I highly recommend buying from this seller! I know I will be a repeat customer. Just take a look at what she sent me!


The crypts that I added back in December have really taken off. Both plants have very little melting, and I see lots of new leaves. The tiger lily did not make it. It showed good growth for a few weeks and then the leaves just withered away and never came back. I noticed a problem with the flow behind the smaller piece of driftwood, and had to move the wood and the dwarf sag and pygmy chain sword that was behind it. The sword never recovered and my other sword that was in the tank died off, too. The dwarf sag is slowly recovering, but I don't think it will ever do well there. So I'm looking to put some more crypts on the right side later this year.

In the beginning of February I ordered kuhli loaches (Pangio oblonga) and a trio of honey gourami (Trichogaster chuna) from The Wet Spot in Oregon. Everyone came through quarantine without a hitch so they were put in the main tank a week after they arrived. In fact, they actually spawned twice in the QT to give you an indication of the health of the fish when they arrived. The Wet Spot is another seller I highly recommend.

Not too much has changed in my betta and goldfish tanks. I removed the fake floating plants in the goldfish tank since the live plants have grown large enough to fight the current from the filters. It took the goldfish a little bit to get used to, but they're adjusted now.

In the betta tanks I've replaced the home-made sponge filters with Hydro II sponge filters. I noticed some algae issues a few months back and decided I needed a bit more flow. The Hydro II's have give that to me but still keep the flow low enough for the bettas. It's a win-win!

And I did a bit of decorating both tanks for Valentine's Day!

My last bit of news is a plan to set up a new tank! The plants in my second betta tank just never did well. So I'm breaking down that setup, finding new homes for the bettas and setting up a dedicated red cherry shrimp tank! Those little shrimps were just supposed to be a placeholder until I could get some movement in the tank, but I've fallen in love with them. I have seen the female RCS holding eggs in the community, but I've never seen the babies. I'm pretty sure the fish are eating them. So instead of fighting nature I'm going to dedicate a tank to my shrimps!
Posted by Izzy the Fish Girl at 2/15/2013 01:00:00 PM
Email ThisBlogThis!Share to TwitterShare to FacebookShare to Pinterest
Labels: betta, catfish, fancy goldfish, farlowella, gourami, my fish tanks, shrimp, Valentines Day 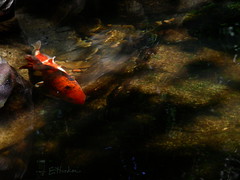 Izzy the Fish Girl
I am a young adult with a passion for fishkeeping and writing. I began my hobby in 2007 and have kept betta fish, goldfish, koi, and schooling tropical fish since I began. I also hold a BS in Fisheries Science and am working towards a masters in Natural Resources. I often use the handle "thekoimaiden" on forums.